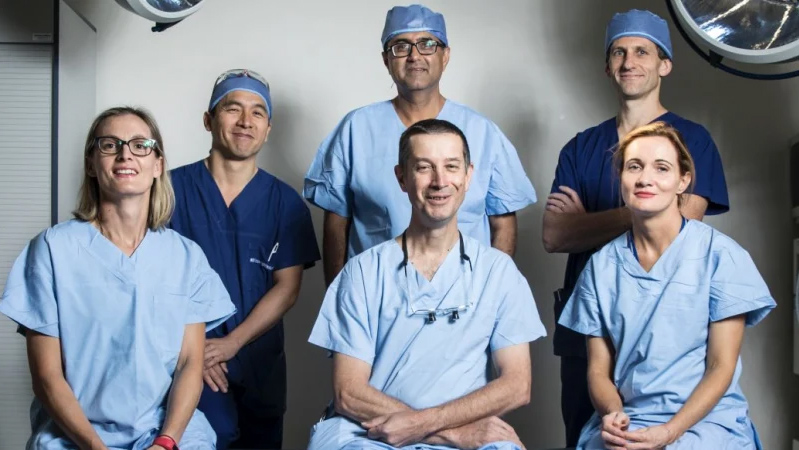 Read the full article on The Sydney Morning Herald

Hurtling through the Lane Cove tunnel late in the afternoon on Australia Day, Dr Emily Granger was almost willing herself to get a speeding ticket.

“At the time I actually hoped I would see a police car so I could wave them down and they could drive me in even faster.”

The cardiothoracic surgeon never saw a police car and she won’t say what speed she was travelling at in her white SUV Discovery. But after the phone call she had just received, time was of the essence.

“I had just gotten home from the pool with the kids, when my registrar called saying a policeman had been stabbed … and he looked like he was about to die,” she said.

The policeman was top NSW Detective Sergeant John Breda and his injuries were catastrophic.

Detective Sergeant Breda, 45, was stabbed during the attempted arrest of an alleged paedophile at a pub in Sydney’s eastern suburbs.

The decorated officer and two colleagues from the child abuse squad entered the Maroubra Junction Hotel pub about 3.15pm, where they planned to arrest 33-year-old Nick Newman.

Newman was being sought by police after he failed to attend Penrith Court two days earlier to face multiple charges, which reportedly included several counts of sexual assault.

The 33-year-old is believed to have known he was wanted by police regarding a series of child sex charges.

In dramatic scenes, Detective Sergeant Breda was stabbed multiple times by Newman in the beer garden of the pub, where he suffered severe chest and abdominal wounds.

Witness Brett Douglas was close by in the hotel and was the first to render first aid to the policeman as he lay bleeding heavily next to his attacker.

Mr Douglas said the detective remained conscious while waiting for an ambulance, even going so far as to direct his own first aid treatment by requesting more pressure to the site of the stab wound.

Newman, from Penrith, was shot dead by two other officers, after he lunged at Detective Sergeant Breda.

The long-standing officer is a popular and highly respected member of the child abuse squad, and previously worked in the Middle Eastern crime squad.

“It was an injury designed to kill,” Dr Granger said of the wound inflicted with a 15-centimetre combat blade.

“It had gone through the side of him, through the kidney, through the liver, through his diaphragm and up into his lungs. The entire blade had been inserted to the hilt.”

An average adult male of Detective Sergeant Breda’s stature has five to six litres of blood circulating in his body. Over the course of the next six hours, the 45-year-old would lose his entire blood count three times; sending up to 15 litres of blood gurgling down the drain.

Ask any of the doctors present that day how many people helped save the life of Detective Sergeant Breda and they will struggle to give the exact number.

There were the paramedics who were first to reach him at the pub and brought him to St Vincent’s emergency department.

There was the department’s public holiday skeleton staff who stabilised and transferred him to the operating theatre, while he remained conscious, in just under 20 minutes.

All this was before the arrival of four surgeons, two anaesthetists, their nurses and registrars, the hospital’s blood bank and the haematology department.

There also were the breathless porters who ran units of blood to the theatre in a desperate effort to keep pace with the rapid blood loss.

“When I arrived [the registrars] were opening the abdomen and there was basically blood pouring out of his belly, so I knew we were going to be in trouble,” Dr Granger said. “The patient was in trouble.”

That Friday afternoon Dr Roma Steele was the general on-call anaesthetist at St Vincent’s when she received word of the stabbing.

“I was actually just about to leave … then there was a trauma call in the hospital and they asked if I could come down. Often we get these calls and they are false alarms,” she said. “But it was immediately obvious this was no false alarm.”

Dr Steele was joined by fellow anaesthetist Dr Andrew Jackson, who specialises in heart surgery and is used to dealing with heavy blood loss.

“I arrived probably about half an hour after the patient arrived. There were police swarming everywhere and lots of press already, so I knew it was a big deal,” he said.

“For about two hours we pretty much had uncontrollable bleeding despite various best efforts. This was a time where blood transfusion really did save someone’s life.”

“Normally you give about one milligram and that’s if there actually is a cardiac arrest.”

The role of an anaesthetist in any surgery is to stimulate the body’s functions while a patient is unconscious.

“When you give a lot of blood products you tend to get lots of calcium, so during surgery we are constantly taking blood samples, giving different drugs until it goes back to normal,” Dr Jackson said.

As they gradually stemmed the blood loss, and fixed the lacerations in the officer’s diaphragm and lung, things were looking up.

Dr Steele remembers “the mood in the room lifting”.

“Initially they were pretty happy with what went on,” said general surgeon Dr Rohan Getts, whose surgical registrar had been keeping him up to speed over the phone.

“But then he rang me to come in … the kidney was unstable, although he had tried to put in stitches, the bleeding wouldn’t stop.”

The laceration to the kidney was causing blood to escape through the bladder.

By the time Dr Getts arrived, the bladder was so full of blood it was “the size of a football”. It should be the size of a walnut.

The surgical team had now determined that the officer’s kidney had effectively been cut in half by the knife and there was no chance of stitching it closed. They called for urologist Dr Raji Kooner and vascular and trauma surgeon Dr Tony Grabs.

“At this stage we were up 10 litres of blood loss. It was quite shocking really, I phoned Tony and said, we need you here now. You just need to get in however you can, this guy is about to die and he needs his kidney out,” said Dr Granger.

“It was very difficult accessing the kidney from the right side, we needed a special trauma approach. As soon as Grabs walked in I grabbed the saw and opened his chest.”

Dr Kooner has seen a lot kidneys in his time, but he said Detective Sergeant Breda’s was one he was unlikely to forget.

“I’ve been working 20 years … done quite a few traumas, but this for me … it affected me quite a bit,” he said.

“I was at home with my four kids, watching the TV and I saw a news flash about a policeman who had been stabbed. So that stuck on my mind, but I didn’t really think that would be something I’d be involved with.”

He can’t say why, but Dr Kooner decided to go to the hospital, just in case, a fateful decision that meant he was just 30 seconds down the corridor when the call actually came through.

“There is a main vein to the body, called the inferior vena cava, which takes most of the blood from the body back to the heart, and that is joined to the kidney. But it was impossible to identify that because of how much blood there was swelling up,” Dr Kooner said.

“The concern was if we went in there to take out the kidney … we could tear his vena cava … so the situation was quite dire.”

With all hands on deck the team was able to control the bleeding, however “a few more minutes and things may have been a bit different”, Dr Kooner said.

Almost two months to the day of the stabbing, the decorated officer has been praised repeatedly by his medical team for his “incredible” progress, starting rehabilitation just four days after the incident and his mammoth six-hour surgery.

“We were very lucky we had a patient as strong as John,” said Dr Granger, “physically and mentally.”

The cardiothoracic surgeon, whose patients are usually around 80 years of age, still remarks on his “young, solid bones and excellent quality tissue”.

She said a case like Detective Sergeant Breda’s did not come along often.

But when they did, it was a privilege to get the call.

“These guys put their bodies and their lives on the line,” she said. ”I may get a speeding ticket to get to them, but it’ll be worth every cent.”

NSW Police Commissioner Mick Fuller said: “I have been following John’s progress closely and I look forward to welcoming him back to work when he is ready.

“His strength and commitment to recovery is inspiring to all those around him.”