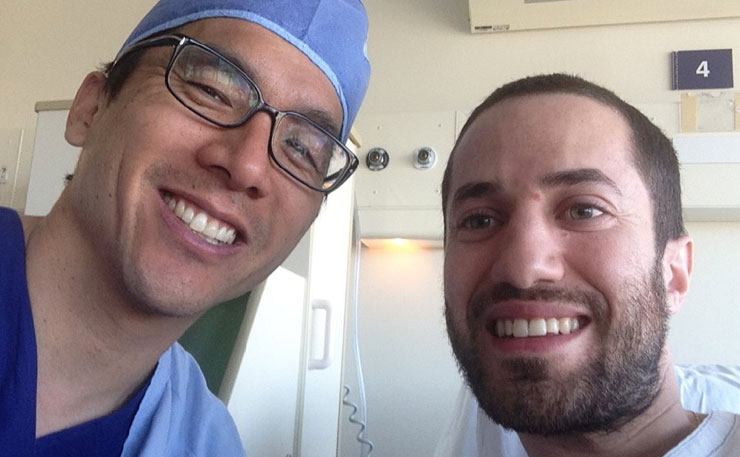 Stomas and J Pouches: Michael Brull’s Brush With His Own Mortality

This week, Buzzfeed ran a story which picked me up and made me smile. It’s about the experiences and Facebook page of Krystal Miller. Miller is a 32-year-old woman with a stoma bag. The reporter largely lets Miller tell her own story, and links to her page, Bag Lady Mama.

The article doesn’t quite explain what an ileostomy is, so I will try to (readers will have to bear in mind that I primarily learned about this in a state of very limited sleep and high stress).

A hole is cut into the abdomen, and the bowel is redirected. Instead of directing faeces to the anus, the bowel protrudes slightly from the abdomen. The bit that’s sticking out is called a stoma. It looks red, and is a bit swollen after surgery, but gradually declines in size. Faeces comes out of it. People with a stoma wear a stoma bag over it.

For the functional equivalent of defecating, people with a stoma bag empty its contents into the toilet. Typically they are emptied regularly through the day.

One estimate is that this will be done 5-8 times during the day. The bag itself is typically changed three times a week, but some people will need to change it more regularly. The bags come in different shapes and sizes. Miller has posted numerous selfies featuring her stoma bag. This is one of them (below):

Readers may not realise if they know someone with a stoma bag. The bag can be quite small, and easily disguised or hidden with clothes. Some people – like myself – publicly announce that they have acquired a stoma bag. Others keep it secret. They may feel embarrassed by what they consider a physical defect.

Miller has Crohn’s Disease. I used to have something called Ulcerative Colitis (UC). I was diagnosed with it in 2009. I was shitting blood 10 times a day, and became very weak.

At first, my specialist and I hoped that we could treat my condition with medication. We gradually increased the medication, which became increasingly less effective.

By late 2010 I thought it was a matter of time before I had the surgery. I didn’t really understand it, but I dreaded it. I thought I would look… different. Someone to be pitied.

Around 2012, I visited a stoma nurse, who showed me what a stoma bag was and how it worked. It seemed less alien and daunting.

In January 2013, I was admitted to hospital. My UC had flared up, and despite being on several meds – and regular shots of steroids – nothing would get it under control. I was going to have surgery. And it terrified me.

Would this make me disabled? Would I be able to do everyday activities? Would any woman want to be with me again?

Those weren’t my only fears. Indeed, for a while, they were secondary. The first surgeon who visited me told me the mortality risk was 31 percent. That is almost a one in three chance of dying. Though the first surgery would leave me with an ileostomy, if I had two more (optional ones), the stoma would be reversed. They would create something called a J-Pouch. But they also came with serious risks.

Eventually, I surrendered to the inevitable and agreed to surgery one. I had a wonderful surgeon, Dr Rohan Gett, who treated me with kindness and respect. And within a few hours of waking up, I announced on Twitter and Facebook that I had had surgery and now had a stoma bag.

This shocked most of the people I knew. For most of the time I had UC, only my immediate family members and a few close friends knew that I had it. Everyone else was in the dark, with a few exceptions as 2013 approached. I didn’t tell anyone the chances of me dying in surgery. I only admitted it months later.

Why did I announce that I had a stoma bag? One reason was a few throwaway tweets by Melbourne lawyer Jessie Taylor. Jessie is an advocate for asylum seekers, who was one of the leading filmmakers of Between the Devil and the Deep Blue Sea. She wrote “2yrs ago today I had a colectomy” because her Crohn’s/Colitis had gotten so bad. She said “These awful diseases are invisible, but ruin lives. We should talk about them more! I am very well now but I’m a lucky one.”

Though a small gesture, I drew strength from it. I wasn’t alone. Someone else had been through the same thing. And not just that: someone in the same boat was doing something meaningful with her life.

I decided that just as Jessie had made a difference to me, so I wanted to act in my own life. I wasn’t going to hide my stoma bag, and anxiously worry about people finding out my dark secret. I had been in the closet about my UC for long enough.

When I did announce that I had a stoma bag, the reaction took me aback.

Leaving hospital after my first 44 day stretch, having survived surgery 1.

I had been scared that people would pity me. They would treat me as weak, they would anxiously worry about the correct way not to offend me now that I had become a fragile person with a disability. Yet the reaction was mostly that I was very brave. Perhaps some of this was the sense that announcing a stoma bag publicly is scary. I think some of it is also the Timmy O’Toole phenomenon. The uncomfortable and thoughtless sense that someone who has suffered is brave, purely because they have suffered.

Regardless, I felt much better off having publicly announced my ileostomy. I owned it, and incorporated it as part of my story, and expected to be treated as the same person. And that’s what happened.

The difference in phrases may seem subtle to some. And for many, it may feel like political correctness is always updating the correct way to address this or that group. To me, “disabled person” is a phrase that suggests the defining feature of a person. “Person with a disability” indicates that the disability is just a characteristic of a person.

Some may think – well, someone saying “Jewish person” doesn’t speak in a way that suggests Jewish defines that person entirely. Yet the way language and stereotypes work is that language without a sting in one context can sting in the other.

Over the course of the rest of 2013, I had lots of other health issues. From January to October, I spent about 96 days in hospital. I didn’t take many selfies with my stoma bag, but I took a few in September. In October I got a J-Pouch. Helpfully enough for readers, Sam Cleasby has a great blog about her experiences with a stoma bag and J-Pouch.

Stoma bags and the related conditions typically involve things that are, if not gross, then the kinds of things that most people don’t talk about. In the last few years, I have touched shit probably hundreds of times. A front on picture of the bag pictured above shows shit in it.

To someone with an ileostomy, these are things in the realm of normal. People with ileostomies also get used to a bit of their bowel hanging out through their abdomen. They peel off the bag, clean the area around the ileostomy, and then apply a substance to protect the skin and make it sticky, before applying a new ileostomy. Other steps may be needed for those who need additional skin care or help in making the bag stick.

This means that people with stoma bags don’t just look different. They have different experiences. Experiences that most people don’t know about, and probably won’t ask about, because they’re not the kind of things that come up in normal conversation. Yet different experiences doesn’t mean less human, or alien.

This is why I find Miller’s Facebook page so wonderful. She frankly and unabashedly talks about her experiences. She talks about explaining her ileostomy to her son, and shows a picture of it. She talks about sex. About wanting to feel loved after her surgery, and getting back together with an ex-fiancée who had cheated on her. About talking to guys about her bag, and finding acceptance. About brushing off those who couldn’t look past it. About trying to pick up men with the bag. Oh, and she went on a cat walk for a fashion show with ostomates.

There is a tedious tradition of able-bodied people looking at a person with a disability and fondly saying that they are just so inspiring. The way that they brush their teeth, listen to music, or don’t spend all day crying.

I’m not going to say that Miller is inspiring. But though I am very glad I announced my health issues, I do not like writing about them. I find it weird and difficult to discuss my experiences – let alone my feelings.

The value in listening to people talk about these experiences is that they allow for a greater sense of understanding. And they make people with similar experiences feel less isolated and alien.

Furthermore, it is not just people with stomas who can feel different. About 1 in 5 Australians has a disability. That reaches 43 per cent for people over 55. Yet how often are these stories told? How often in popular culture are meaningful, complex characters people with disabilities? How many readers have seen pictures of – or heard about the lives – of people with ileostomies?

This is not to say that the only issue facing people with disabilities is that other people don’t understand or appreciate them enough. Issues of systemic discrimination are real, and need to be addressed. The fact that the Coalition axed the Disability Discrimination Commissioner from the Human Rights Commission – the only commissioner they did axe – gives a sense of how concerned they are with these issues.

But there are also issues that need to be addressed on a cultural and psychological level.

Miller writes about her life without blushing or cringing. This can help destigmatise those experiences.

Rather than being silently born as personal burdens, they are part of life’s rainbow of experiences. They can be happy, sad, fun, weird, exciting and a lot of other things too. Above all, they are part of being human.